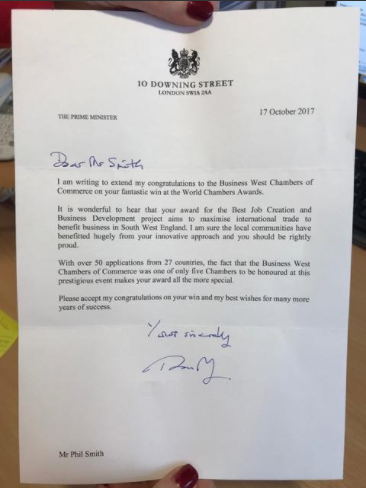 The Prime Minister herself has sent parliamentary congratulations to Business West on winning the World Chambers Competition for the Best Job Creation and Business Development project.

In a letter Mrs May acknowledged the magnitude of the win, writing:

“With over 50 applications from 27 countries, the fact that Business West Chambers of Commerce was only one of five Chambers to be honoured at this prestigious event makes your award even more special.

Please accept my congratulations on your win and my best wishes for many more years of success.”

Organised by the ICC World Chambers Federation, this year’s World Chambers Competition was held in Sydney and is the only awards programme of its kind. Business West’s award was for a project which aims to maximise international trade as a means of benefitting business in South West England – and was in recognition of achieving almost £½ billion worth of additional export sales and creating nearly 4000 new jobs.

Other 2017 winners were from Brazil, Germany, UAE and Columbia.

“Using our global network of Chambers and private sector partners, we are determined to ensure that, despite all the uncertainty around at the moment, we can still drive business growth and success for our members”.

And there was double delight for Business West this week as they have also been invited to go to the House of Commons to accept yet another award in recognition of their International Trade services from the Enterprising Britain Award (EBA). 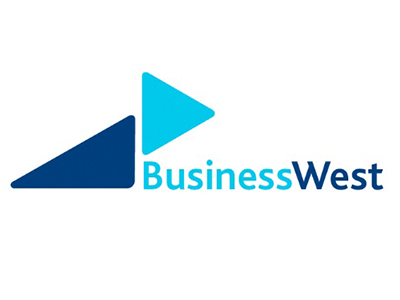 In the last 6 years, Business West has helped educate and support over 22,000 businesses of all shapes and sizes ...