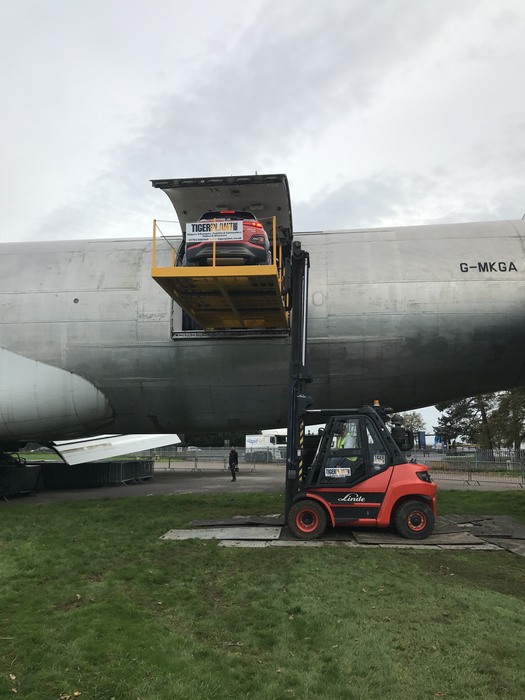 Business owners Stuart Morgan and Andy Rohrer have taken their recently launched plant hire company sky high - accepting a job many others would find too daunting.

The company were tasked with transporting two new Hyundai cars from the ground and positioning them inside the fuselage of a Boeing 747 former cargo transporter aircraft. The event, to launch the new models, took place at Cotswold Airport, near Cirencester.

Andy Rohrer said: “This is the most unusual job we’ve been asked to do! The cars weighed two tonnes each so we designed a pallet to support the cars while a forklift – itself weighing more than 15 tonnes – was used to lift each car.

“Forklifts of this size, with the required mast height, are very rare. There are less than five in the UK available for hire.

“It took us four hours to achieve our goal of getting both cars up and inside the fuselage.

“It was a specialist job which took weeks of planning. As a company we’re incredibly open to unusual requests. We’ll always consider the jobs no one else will do. We are very proud we were chosen by Cotswold Airport to carry out this task.”

Jo Welch, PR and Events Manager at Cotswold Airport said: “Stuart and Andy could not have been more helpful. They did everything exactly according to the brief. It was a pleasure to deal with Tiger Plant and we won’t hesitate to use them again.”

Tiger Plant was created when Andy and Stuart, who already worked together as property developers and builders, founded the company when they recognised one of their continuing problems on their building sites was getting the right plant to the right place at the right time.

Stuart said: “We will consider any job large or small. We want people to know they can come to us with any practical concerns about completing a home extension, landscaping a garden, building their own home or putting something into an aircraft! We’ll do our best to provide the equipment, and sometimes the specific skills, they need to do the job efficiently, cost effectively and safely.”

The company, based out of Clearwater Business Park in Swindon, has grown rapidly during its first year of operation. The team offers machines for hire for use by the individual homeowner with smaller building projects right, through to commercial developments.

The range of plant available includes micro diggers, a selection of midi diggers and larger diggers up to 20 tonnes. Also available for hire are telescopic and masted forklifts, one to ten-tonne dumpers, compaction machines, fuel bowsers and access equipment.