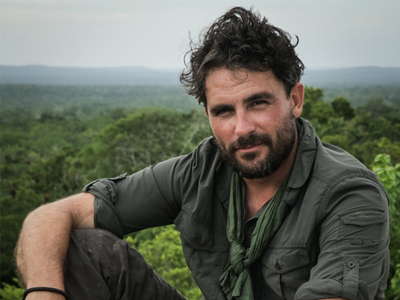 Ahead of his highly-anticipated visit to Swindon's Wyvern Theatre, we were given the opportunity to have a quick conversation with internationally renowned adventurer, Levison Wood.

For those who may be unfamiliar, who are you and what do you do?
Well, my name is Levison Wood. I’m a writer… traveller… photographer…explorer… all sorts really!

What can people expect from your show at the Wyvern Theatre?
The show is going to be an opportunity for me to share the stories I have. From the televised expeditions I’ve been on, as well as all the other adventures when the cameras weren't there, and the audience will be encouraged to ask questions about anything they like! It’ll get a little bit deeper too, it’s not just about the places I’ve been, but what it means to see the world and the human stories you encounter along the way.

Where has been the most surprising place you’ve visited and why?
I’d have to say Sudan, honestly. I went in with a few pre-conceived ideas, which weren’t that positive I’m afraid to say, but I couldn't have been more surprised by just how warm and friendly the people were. Defnitely an eye-opener.

What has been your proudest achievement to date?
Wow, that’s a tough one.. I’d have to say commanding a parachute regiment in Afghanistan. Being responsible for a group of such fantastic men in such a dangerous place made me feel very proud indeed.

How does someone become a professional explorer?
Well for me it was a natural progression from being in the military. I always wanted to travel, write, be a travel photo-journalist, really. I had my own expedition organisation where we’d take people on these amazing adventures and I got the opportunity to do some TV. It’s just grown from there.

You work with a number of charities and are a supporter of the Duke of Edinburgh Award, why do you think it’s important for young people to be interested in outdoor pursuits?
I did the D of E from when I was 14 until I was 17, did all the bits, all the little expeditions to Wales and Scotland, and it inspired me to meet new people, gain leadership skills and helped me develop as a person. I think it’s really important to learn things outside the regular curriculum.

Walking the Nile, Himalayas and America’s – where’s next? Is there anywhere left!?
Well, the world’s a big place! There are plenty of places left to explore; I’ve got another trip planned this year, but I can’t share where it’ll take me I’m afraid! It should be coming out towards the end of the year.

What’s next for you, once your tour of appearances has ended?
This tour will see me visit twenty five cities in about the same number of days, which is really exciting but tiring! Getting good feedback from my shows is really rewarding, with people coming up to me saying that I’ve inspired them to do more travelling. But as soon as this tour is over, it’s right on to the next adventure.

You’re a best-selling author, do you make time to write while you’re away on your adventures, or do you have a different process?
I keep a journal while I’m out there, but the bulk of the work is done when I’m back. I can lock way for a few weeks and get the book finished. The deadlines are pretty tight, I got my last book finished in just five weeks.

Who is the person you admire or respect the most?
When I received my Best Adventure Travel Book of the Year, I was given the honour of presenting Michael Palin his lifetime achievement award, which, as a huge fan, was certainly a surreal experience! He’s definitely someone I admire.

Levison Wood will be at the Wyvern Theatre on Tue 7 March.
The last few remaining tickets are available at swindontheatres.co.uk
or from the Ticket Office on 01793 524481.