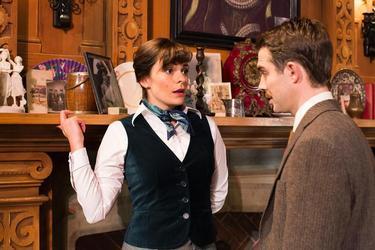 While they were in town, TGtS quizzed Jonathan Woolf and Ellie Jacob about playing Sgt Trotter and Miss Casewell in Agathe Christie's classic murder mysetry The Mousetrap. The show's Diamond Anniversary Tour will be heading to the Wyvern Theatre this February.

How long have you been an actor? How did you get started?

Ellie: I left drama school three years ago, I've wanted to be an actress ever since I was young though. I did my first ever play when I was about 7 at the Watersmeet Theatre in Rickmansworth.

Jonathan: I started acting when I was 8 years old, I did a lot of work from when I was 8-15, I left drama school about 5 or 6 years ago, so I've been acting professionally since then. West Side Story was what made me want to become an actor initially, I've got home movies of me wearing my converse and play fighting with my brothers.

Who’s your favourite actor/actress and why?

Jonathan: Robert De Niro, Marlon Brando and Al Pacino have all been great inspirations for me. Their approach to acting is so realistic and their portrayals of characters are always so authentic and detailed. I'm a bit of a method actor myself, I always want to be convincing and believable no matter what role I'm in.

Ellie: I adore Jane Horrocks and Julie Walters, they've been my favourite actresses since I was very young, I can remember watching Little Voice and Educating Rita years and years ago and being totally mesmerised by their performances. Their accent work is amazing, they can change and be a totally different person in seconds - I'd love to be able to do that!

What can audiences expect from the show? Why should TGtS readers go along?

Jonathan: I think that audiences will be entertained, it's quite a funny yet moving piece. People will certainly be guessing right up until the very end.

Ellie: Everyone loves a good 'who dunnit' don't they?

Tell me a little bit about your characters, are they enjoyable to play?

Jonathan: We can't reveal too much without giving away the story away.

Ellie: Everyone's character has got all of these great secrets and the reasons that they give for being at the guest house might not necessarily be the truth. The play itself was written not too long after a very shocking scandal in England involving a nasty case of child abuse and it's based very loosely on that. I can't give too much away or else I'll ruin it.

Is it a daunting experience taking on a role that’s been performed so many times before? How do you prepare/how is your portrayal similar or different to other actors?

Ellie: You really want to give your own take on it but I'm sure there's someone who played it exactly the same as me 30 years ago. The script is what it is, you read it and interpret it as you interpret it. So long as you feel right doing it, there's no pressure really.

Jonathan: I think that you just have to have your own approach and be confident in what you're doing. I'm the first person I think to have moustache in this role, so i'm breaking the mould a bit. Personally I do what I believe in and don't really think too much about how the role has been played before.

The play was written in the early 1950s and has been performed for more than 60 years, why do you think it’s remained so popular?

Jonathan: I think that it's the way it's written, although it may be a little dated now it's one of those stories that's really cleverly written and I don't think there's many people nowadays that could write a piece that keeps you on the edge of your seat like Agatha Christie did.

Ellie: Like I touched upon earlier, British audiences love a good 'who dunnit', as a nation we're obsessed with murder mysteries - it's a very popular genre.

Has anything embarrassing or unexpected happened to you on stage?

Ellie: Every now and again things happen, sound cues come a tiny bit early or someone trips over something, but the audience loves it so it's never really a problem. We haven't had many humdingers yet but there's always time!

Jonathan: I'm sure after 200 shows we'll welcome things like this happening just to spice things up a bit.

What other parts would you really like to play?

Jonathan: I love classical theatre, so for me there are loads of roles that would be an absolute dream to play.

Ellie: I've got my heart set on playing Cleopatra when I'm older. You watch a lot of modern dramas and sit there and think 'I could have done that'. In the future I'd also love a cracking dark TV drama.

You’ll be in Swindon for almost a week, what to you hope to see or do when you’re not on stage?

Ellie: I've never been before so I'm excited to see what delights Swindon has to offer.

What do you usually do on your ‘days off’?

Ellie: We actually went punting in Cambridge the other day, it's brilliant, you go on a boat and you've got this massive punt that you have to use to steer - it was a bit a budget version of a gondola in Venice but it was so fun to do. 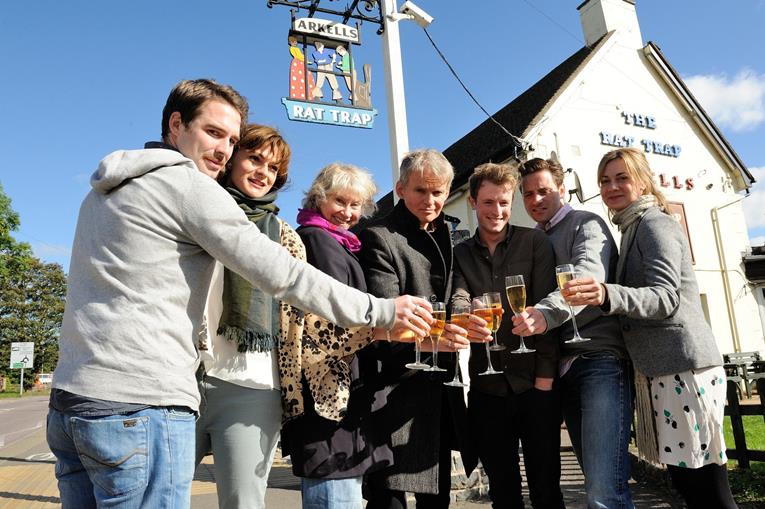 Snapped: The cast of The Mousetrap at The Rat Trap

The Mousetrap is famous around the world for being the longest running show of any kind in the history of ...

Joanna Croll and Henry Luxemburg spoke to TGtS about playing Mollie and Giles Ralston in Agatha Christie's timeless classic The ...