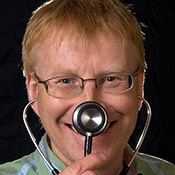 Ahead of his appointment at Swindon's Arts Centre on Wednesday 21st June, we spoke to real-life NHS doctor and comedian Dr Phil Hammond about his show, Dr Phil's Health Revolution, growing up in Marlborough and finding the funny in hospital.

How would you describe your new show, Dr Phil’s Health Revolution, in 30 seconds or less?

It's a bidet revolution - from the bottom up. You'll laugh, shout, learn to SYOSO (sort your own s*** out), SEOSO (sort each other's s*** out) and save the NHS.

You’re a doctor, broadcaster, journalist AND a comedian, how do you juggle such a busy schedule?

It's all pretty much the same job. Listening to people's stories and telling my own stories. They say laughter is the best medicine, unless you have syphilis - in which case it's penicillin.

With all the pressures facing doctors and the NHS at large, is it difficult to find room for humour?

No. I think the best humour comes out of adversity. People care passionately about the NHS and how it's being deliberately defunded and satire is a great way of exposing the political lies

What’s been your biggest achievement to date?

Getting to 55 without needing a night in the NHS

Being educated in Marlborough you must have some fond memories of the local area, what are your feelings about Swindon?

Love it. My second Dad, Stan, took me round the Country Ground to meet Don Rogers and John Trollope when I was a kid, and I saw lots of great bands at the Brunel Rooms

What can audiences expect from your live show?

Laughter. A hug. A diagnosis. And if they ask nicely, a prescription

You’ve also written a number of books, which is your favourite and why?

Staying Alive - How to Get the Best from the NHS because I think it's genuinely useful (and so is Sex, Sleep or Scrabble?)

What’s your process for putting together a live 99-minute stand up show?

I did two separate shows at Edinburgh 2016. 46 performances in 23 days to polish it up for a tour. So, the whole show is actually 120 minutes

What’s next for Dr Phil after the tour?

I want to write a book about how to die well

What’s the biggest misconception about doctors?

That they're different to other people. We're just the same. We're all cremated equal