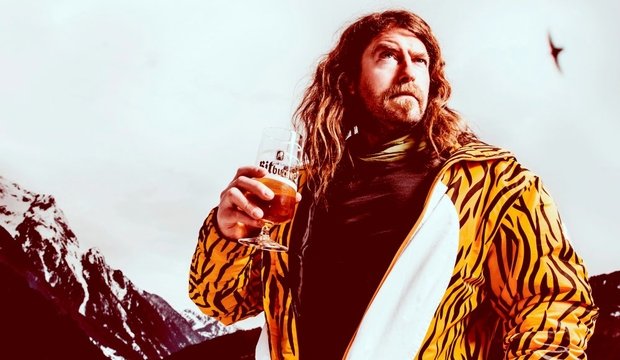 With the news that the majestic mountain moose in a tiger-striped onesie (Craig Campbell) is bringing his thrilling new show Easy Tiger to SUJU's Comedy Club, we thought we'd have a chat with the man himself!

What can Suju's audience expect from your 'Easy Tiger' show?

The rockin pneumonia and the boogie woogie flu! I don't know? Redemption? A crisis? A coughing fit?? An hour and a half-ish of semi-autobiographical stand-up with moments of disillusionment I'd guess? And some begging I'd imagine. Holiday snaps.. and an operation story. Fun for everyone-ish.

How did you discover that you could tell a good joke/story?

?? Ahh.. yes! I don't know.. I was lucky enough to live in a time and a place that had little television and I'm a fantastic conversation hog so.. once I was hogging a conversation in a cabin near a lake in Sasquatch country and the guy who professionally starved the cast on mountain during the filming of Alive said, 'hey, you should hog the conversation in larger rooms' and I'd never heard of that possibility before and went to try it.. later those dudes saw some of my early work and they won't speak to me anymore.. untrue.

Where did the inspiration for the ‘Easy Tiger’ tour come from?

The photo that accompanies the tour was the pivot of that inspiration. It's an unbelievably spectacular shot, taken by an extremely gifted artist Idl Sukan and I couldn't photoshop out the tiger suit so.. we just left it in!  Most of what you see is authentic with some photo tricks done.. THE PYRAMIDS FOR EXAMPLE.. taken at the bottom of a snowboard race in Austria against MUCH YOUNGER MEN.. anyway.. I hadn't slept the night before because YOU CAN'T SLEEP WHEN YOU'RE DRINKING.. and went home with a prize Tyrollean goat if I recollect correctly? With the birds in shot at attacking angles and the mountains just behind I just knew I had to immortalise the shot for myself. I was very lucky to have a photographer of such phenomenal skill catch me at such an enjoyable moment of my life.

What do you miss about home when you’re on tour?

Did you know anything about Swindon before you decided to bring your tour here?

I don't know anything about Swindon now?! No. I'm kidding. (I'm not) I am. I've been to Swindon quite a few times and have enjoyed every time, and it's close enough to Avebury and Silbury Hill to be alright by me.. have been handcuffed more than once on your famed roundabout to never forget you also.

Out of all the jokes you have written, and told, what's your favourite of them all?

I really enjoy doing an impression of people where I'm from, I take pride in that, it doesn't really matter to me what people think of that as long as I've challenged myself to be authentic. It comes in the middle... are you still listening!!? I feel like I've misinterpreted how long these answers can be.. ANYWAY! .. it comes in the middle of a story where a Scotsman gets taped-up by bouncers in Canada and the 'had to be there' factor for a Swindon audience would be a sustained 11 I'd reckon.

When you’re not on stage, how do you like to spend your free time?

I've a VERY young daughter and she consumes ALL my partner's and my spare time and with what little extra time I have I enjoy travelling and mumbling in place. I checked out the 'disputed' pyramids of Bosnia last year for a week and would encourage anyone else to do the same before they get squashed like a bug by the big western boot of 'science'.

Looking back what would you say some of your career highlights have been?

Opening for Jim Carrey on NYE 1991 was pretty cool, that resonates with me forever.. and being the first stand-up to play North Vietnam was pretty awesome too.. would've been more awesome if I wasn't first because I was opening for a stronger, more famous act!! (Paul Zerdon).. but still... and probably the tours opening for Frankie are the peaks of my success. I did 120 episodes of a tv show back in Canada in the 90's but I'd be really scraping the barrel to tell you about it. More.

What advice would you give to someone looking to pursue a career as a comedian?

Find a good firm oak branch and learn to tie.. no. I'm being needlessly cruel and dark. It's a dream if you can do it and it's something I should never dissuade others from. If you really feel it's your need, make sure you get on stages everywhere you can, no matter the theme, karaoke, music nights.. whatever, and try to make strangers laugh. I always talked to the bus drivers in every country I was lost in. Make them laugh. Pick up a hitchhiker. Essentially get ready to be a mad c#nt.

What’s next for Craig Campbell after the tour?

Edinburgh in 2018 and continuing to build audiences toward my next tour. I'm lucky enough to be asked to host something I can't announce but that's unlikely to be ongoing regardless. This is a pinnacle achievement for me, touring, entertaining my humble, shockingly loyal and supportive audiences and feeling pride in the challenge to do so. It's a great honour to have people trust you to make them laugh and I feel lucky to have that.

You can catch Craig Campbell Easy Tiger at Suju on October 22nd, Grab your tickets here!