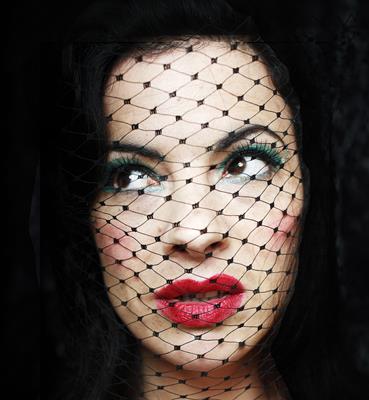 Ahead of her visit to the Wyvern Theatre in Swindon on the 5th of March with her show 'The Carny Dream', we were able to catch up with the multi-talented performer, Camille O'Sullivan.

Give us your 30-second elevator pitch; what’s your name and what do you do?
My name is Camille O’Sullivan, am a half Irish and French singer and actress who used ot be an architect!

You seem to take inspiration from many performers, who has impacted you the most, and why?
Inspired by Nick Cave and David Bowie the most. Cave for his beautiful dark stories and characters he creates and then his explosive rock songs, great black humour and darkness and, well, Bowie was just an extraordinary song writer, his songs make me want to laugh, cry, dance, very emotional songs and powerful left-of-centre rock songs, loved his personas which he was all of them.

How would you describe your show ‘The Carny Dream’?
Not mad about the reality of my life so like to create magical fantasies on stage in the shows. This begins with thunder and lightning, there is a chameleon aspect to the show about becoming different people through the songs of Cave, Brel, Radiohead, Bowie - it’s been likened to an emotional rollercoaster; starts enigmatically and then unravels as if I’ve climbed out of the bushes! One of my favourite lines from Cohen relates to it: “there is a crack in everything, that’s how the light gets in.” Things being not perfect, being vulnerable, life’s madness etc. that’s where anarchy and joy can happen. It uses the theme of circus and dreams thoughout, I've always been obsessed by the left-of-centre loner character from the circus and dreams, well that’s introduced through the songs I chose and little recordings I made between the songs to make the show flow as if a little dream.

What makes ‘The Carny Dream’ different from your other shows?
Rockier than before, a few more modern songs of Goldfrapp and Radiohead. I’ve changed over the years so the show will be different due to that. As the show was created last year. There is also a part of the show right at the end that I dedicated as a little love letter to Bowie, who I admired and loved so much, and then a nod to Prince in the encore before finishing with a lullaby. I had mentioned it at the time I didn’t want anything to happen to Cohen, which now he has sadly passed away I think I will dedicate the end of the show to those great three. Less of a tribute more of a "thank you for being so inspiring and brilliant and for making a little dream for me to want to become a singer because of them." Those artists and their songs are bigger than me, so I’d feel weird doing a tribute to them. It feels very different to sing their songs now they are gone, but I feel lucky to share celebrating them with the audience, feels like we’re doing that together .

From the Sydney Opera House, to Later with Jools Holland and the Fringe, what’s been your biggest achievement to date?
Well I was delighted to have done those two! Playing the Royal Albert Hall, Royal Festival Hall would give you a heart attack but was great after it was done. I suppose writing the music with pianist Feargal Murray and performing the solo show of Lucrece for the Royal Shakespeare Company, that means a lot to me.

When you’re not busy touring, how do you like to spend your down time?
Sketching, sewing, seeing dear friends, cleaning my bedroom - I always think I’ve been burgled on retun form tour but realise it was the mess I left it in!

Do you have a motto or favourite motivational quote to live by?
My dad used to always say J.D.I., (still does) meaning Just do it! The sadder version is "Feel the fear and do it anyway", which I try to aspire to, but sometimes get too scared! That’s when J.D.I. comes in handy

What can the audience expect from your performance at The Wyvern Theatre?
An emotional show from an affectionate performer who is slightly eccentric. Joyfulness, sadness, darkness, passion, light, moments of quiet songs and then rocking it out: an emotional rollercoaster. Have a wee red wine, sit back and enjoy the madness unfurl! There might be a gingerbread house and swing on stage…

What’s next for Camille O’Sullivan?
Well we’re currently finishing a live Brel CD which we just performed at beautiful Wiltons Music Hall London, a new film” Pick Ups’ directed by Jamie Thraves is going to be out. Then off on tour to Australia with Paul Kelly and Feargal Murray with a show we wrote music set to Irish poetry from last 100 years, then doing a theatre show of Woyzeck in Ireland and UK and Jim Jarmusch music in the Barbican. Then rest a while!