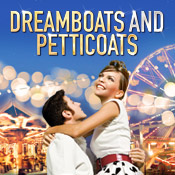 Dreamboats and Petticoats is an energetic, wildly fun “will they, won’t they” story set in 1960s Essex featuring the finest rock ‘n’ roll songs of the time - with all the music played live, on stage, by the actors themselves!

Having grown up to the sounds of mid-20th century rock ‘n’ roll thanks to my Dad, the list of artists whose music features in this show made it a can’t miss for me. Heavyweights such as Frankie Valli, Sam Cooke, Roy Orberson, Billy Fury and many more kept the audience tapping their toes and clapping their hands throughout.

Although the songs were familiar, the cast did a fantastic job of fitting them in to the story. The show centres around Bobby (Alistair Higgins), a teenager with a dream to play in a rock and roll group, only to find the more charismatic Norman (Alastair Hill) gets preferred in the audition. Downhearted and upset, he is cheered up by his best mate’s sister, Laura (Elizabeth Carter). The two enter a song writing competition at the local Youth Club and there starts our ‘coming of age’ story.

The cast, not satisfied with acting and singing incredibly, also provide the music to every number. The sight of their mastery of guitars, saxophones, pianos and all manner of other instruments is as much a treat for the eyes as it is the ears, with the visual performance more than matching up to the musical. The electric guitar solos alone are enough to make you want to pick up a Fender and try it yourself!

With most of the audience comfortably in their 60s, I am happy to report that this was the liveliest and most up-for-it crowd I’ve been a part of. With patrons literally dancing in the aisles during the final few numbers! There was twisting and jiving enough to put much younger revellers to shame.

If you get the chance, I really recommend going to see this show. I run the risk of sounding like someone saying, “they just don’t make music like this anymore”, it’s a testament to the genre that these songs are still being celebrated 50 years after their release and still sound as good s they did all that time ago.

For more information and to book your tickets, click here!