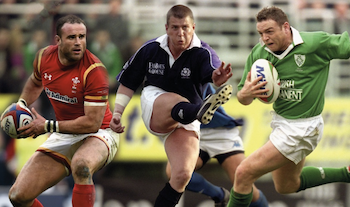 Former Scotland and Lions International rugby player Craig Chalmers believes that this year’s Rugby World Cup will be the most competitive there has been in recent times, as the Northern Hemisphere teams attempt to break the stranglehold of the All Blacks. Total Sport Swindon’s Ryan Walker spoke to Chalmers ahead of Thursday 12th September Rugby World Cup preview dinner at DoubleTree Hilton.

Q: How do you assess the chances of the Northern Hemisphere teams in this years RWC?

“I think they've got a great chance. All the home nations do.

Wales have been outstanding a lot recently. England have been inconsistent when they have the best players on the field they’re great, but if they can keep their players fit then they can be a real threat.

Eddie Jones has brought in new players which I didn’t expect. After the Scotland game that might have set them back a bit. There are enough strong characters in that squad.

Any world cup you go to you need a bit of luck and whoever wins it will have had that luck. Looking at Ireland, they didn’t have a great six nations losing to England and Ireland and I think their team is probably coming to an end of an era.

Can they push one big last effort? I think they can.

Scotland are just massively inconsistent, one week brilliant and the next they will be pretty poor. They play the game one way and if that doesn’t work then the players don’t know what to do.

We’ve got players back, Duncan Taylor will be a big plus and I think he will link up with Hugh Jones at thirteen. It’ll be interesting to see who is picked at scrum-half with Laidlaw and Price.

The backline is strong but upfront we can get bullied at times. But mobility and commitment are there. All home nations are in great nick, everyone's great in the preseason but that goes out the window when the world cup starts. It’s a good time to get to know everyone,” he said.

Q: Scotland were unfortunate to exit the World Cup at the quarter-final stage at the last world cup, do you think the team has improved since then?

“They’ve improved but I think they play a different kind of game now.

It wasn’t quite so fast then and as many offloads, and Scotland can come unstuck against big defences. We have good players and what Gregor Townsend is trying to do is great. We need to adapt and I think the players will be working on that. I think they will play in a positive way and that will be good for us.

Q: Gregor Townsend named Scotland’s RWC squad the other day, were there any surprises for you there?

“Not really no. We have a lot of guys coming back from injury and that’s important.

Stuart Hogg will be key if we can keep him fit. Guys back that we didn’t have last year is a massive boost. I coached a lot of guys at under-20 level and this is a talented squad.

A lot of people will be left disappointed not to be included. Some midfield players will be disappointed, back players and scrum-halves,” he said.

Q: Adam Hastings and Finn Russell will both compete for your old place as Fly-Half in the Scotland squad, do you think these two players bring enough quality to the side when compared to other fly-halves in other teams?

“I think they do and Finn is definitely our number one without a doubt.

Duncan Weir was unlucky to not be included and I think he should’ve been in that squad. Adam has a lot to learn and if Finn had an injury would he be the guy to step up i’m not sure,” said Chalmers.

Q: Away from Scotland, England head into the world cup with a lot of expectations on their shoulders, do you think it’s fair that Eddie Jones’ squad have this?

The problem with England is that they are a very good side but they have come off the rails a bit after that big winning run. They’ve hit that bit of a ditch, but England have a strong team and everyone wants to beat them.

That’s a good thing though because it means you’re a strong team. Eddie knows what he’s doing and I think it’s interesting to hear what the coaches have to say,” he added.

Q: New Zealand have pretty much dominated the World Rugby in recent times, do you see this changing at the 2019 RWC?

“Yes I do see this changing.

They’ve lost a few games recently and I think they’re a bit vulnerable at the moment. Some players aren’t performing, discipline has been poor, and there is concern over Barrett’s goal kicking. I think they’re worried and I don’t think they will win the World Cup.

They’re teetering on the edge a bit and need to get confidence and form back quickly in time for the World Cup. Hansen doesn’t want to go out like a damp squid,” he said.

Q: Finally, who is your pick to win the RWC?

You can’t really pick it. France can be in with a shout if they can turn it around and Wales always come good in big games.

It’s the toughest World Cup I've ever had to talk about,” said Chalmers.