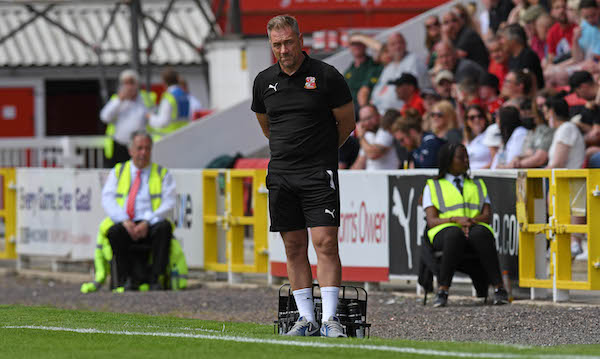 Swindon Town will be hoping to embrace the change as they look to challenge for promotion to League One again this season. Total Sport Swindon's Joe Acklam gives his pre-season predictions on play-off favourites, relegation contenders, and what's in store for Swindon fans.

The summer has been about change and continuity for Swindon as Ben Garner left for Charlton and like the Pied Piper he lured players from the Town to the Valley as he went.

However, Scott Lindsey has moved from second chair to being in charge of the orchestra, which will still be conducted by Swindon’s very own Mozart in Louis Reed, and Mathieu Baudry will continue to provide a steady base line to help make Harry McKirdy’s personal style of free jazz make sense up front.

Think of Swindon like the Sugababes, some of the musicians might have changed, but that song is going to sound very familiar.

The bookies have Swindon as seventh favourites to take the title this season, and this is largely in line with experts around the league, with Gabriel Sutton and the D3D4 podcast both seeing Town as a strong play-off contender.

The favourites for the title are newly promoted Stockport County, who have assembled something of a National League all-stars team, along with players like Fraser Horsfall and Antoni Sarcevic to attempt to make it two promotions in a row.

The other contenders are the two other teams who fell in the play-offs last season, Mansfield Town and Northampton Town, along with: Mark Hughes’ Bradford City, Salford City, Richie Wellens’ Leyton Orient, Tranmere Rovers, and the relegated pair of Gillingham and Doncaster Rovers.

The team to have grabbed the most headlines over the summer would have to be Crawley, partly for signing last season’s top scorer Dom Telford and partly for their ownership being heavily wedded to NFTs, as yet it remains to be seen if the bulk of their squad under first-time manager Kevin Betsy is up to the task of competing at the sharp end.

Picking who is going down this year is tougher than in previous seasons as there are no blatant basketcases who mean that in order to stay up you merely need to avoid having more than a handful of fan protests against the owner.

The favourites for relegation at the moment are Barrow AFC, who after a summer makeover from new boss Pete Wild look suspiciously like last year’s Halifax Town team.

Wild is a good manager who knows how to get more from less and this prediction seems to be more based on the name on the bottle rather than what is inside.

The other candidates are generally sides that struggled last season and have failed to meaningfully strengthen since May, such as: Rochdale, Hartlepool United, Harrogate Town, Colchester United, and Carlisle United.

There is also the possibility that whilst Stockport moves up two divisions, Crewe Alexandra slide the other way.

After a pretty abject 2021/22 campaign in League One, they are still awaiting the next crop of youth players to replace the likes of Perry Ng and Charlie Kirk who have moved on since the last time they were in the fourth tier, until that happens they could well be fighting at the bottom.

Sandro Di Michele seems to have done a strong job at turning talking the talk into walking the walk, as he has brought in an exciting cast of young players who could well have value down the road if the team performs like they are expected.

Lindsey seems to want a similar approach to last season based on friendlies, but with a greater emphasis on being aggressive out wide and will revert to the 352 with which Swindon started last season.

The team has goals in it with Harry McKirdy, while Tomi Adeloye arrives with a far more impressive pedigree than either Tyreece Simpson or Josh Davison had when they arrived at the County Ground. Jacob Wakeling is likely to play back-up following a strong pre-season.

There is also creativity from midfield with Jonny Williams and Ben Gladwin seeming to be the starting pair of attacking midfielders, with a good set of wing-backs in Remeao Hutton, Tyrese Shade, Reece Devine, and Ellis Iandolo able to give teams problems down the flanks.

Defending was ultimately the biggest issue last campaign and that unit has been rebuilt, with Angus MacDonald and Baudry providing experience to go with the younger players around them.

Swindon look to be a side well capable of challenging for the play-offs this season as a greater depth in the squad should help them go further than they did last time.

Where to Watch Sport in Swindon

If you fancy catching a game down the pub with a pint and a couple of mates but don't know ...

There are a whole host of opportunities to play golf in Swindon. From a local golf range, joining a local ...