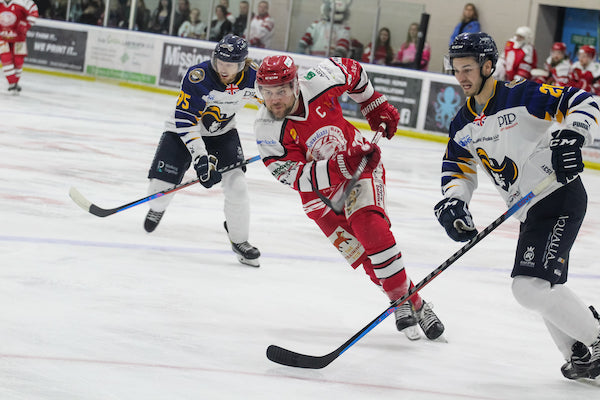 The Bespoke Guardians Swindon Wildcats completed a mixed weekend of results in the penultimate weekend of league fixtures before the end of season playoffs.

On Friday night the team fell to a big 7-2 deficit at the hands of the Basingstoke Bison before bouncing back with a 4-2 victory on home ice against the Raiders on Saturday evening.

On Friday the team travelled to Hampshire knowing a loss would see the Telford Tigers crowned National League Champions for 21/22. Missing key defenceman Declan Balmer as well as the continued loss of Tomasz Malasinski, the Cats got off to an okay start but found themselves a goal down at 11:09 thanks to an Aidan Doughty powerplay strike.

That goal proved to be the only one of the period, despite the Cats generating a couple of scoring chances late on through Nell and Pakozdi.
In the middle stanza, the Wildcats fell further behind thanks to two goals within a minute.

Firstly at 24:05 Adam Harding used his strong forecheck to generate a chance in front of net, and the Welsh forward fired past Marr to make it 2-0. Before just 45 seconds later, Aidan Doughty scored his second of the game when his shot trickled through the pads of Renny Marr to make it 3-0.

At 29:54 the Cats were able to pull a goal back through Balint Pakozdi, after some nice work down low from Aaron Nell and Reed Sayers saw the Cats #3 fire the puck into the top left corner of the goal.

At 34:52 the Bison restored their three-goal advantage, Cain Russell scoring his first goal for the Bison on he powerplay with a snipe in to the top right-hand corner to make it 4-1 going into the final period.

George Norcliffe added the Bison’s 5th goal of the evening at 44:02 before the Cats did manage to get another on the board at 51:41 when Sam Godfrey fired his shot past Mettam with the assists going to Nell and Sayers once more.

The Cats did get a couple of late powerplay chances, however things turned from bad to worse when on both opportunities Adam Harding was able to score shorthanded to complete his hat-trick and 7-point evening. The final buzzer sounded and the Bison took the win, the Tigers took the title and the Cats took a lesson going into Saturday’s game with the Raiders.

On Saturday Aaron Nell and his side bounced back with a solid routine victory in front of another big crowd at the Better Link Centre. At 05:03 the home side opened the scoring when Reed Sayers was on hand to slide the puck in at the back post, with Nell and Pakozdi getting the assists there.

Going into the middle period the Cats again controlled the play superbly outshooting the Raiders by 16-8 and scoring two goals in the process. The first coming at 32:55 when Chris Jones converted past Michael Gray thanks to helpers from Eddie Bebris and Oli Endicott.

At 37:10 the Wildcats #11 was at it again as he scored his second goal of the game, just ten seconds into a powerplay opportunity, this time the apples being given to Eddie Bebris and Aaron Nell.

In the third period the home side were holding a healthy 3-0 lead, but the Raiders are still fighting for a spot in the playoffs and they dug deep to score a couple of goals to make it interesting.

Firstly, the shut-out was broken when Lukas Sladkovsky fired the puck low past Skinns to make it 3-1. Then at 51:08, they got themselves back within a goal thanks to some nice work down low created the chance for Jake Sylvester to rip a puck past Skinns making it 3-2 with just under 9 minutes to play.

With the game becoming ever cagier there was just enough time for the Wildcats to drive the net and get some good fortune when Floyd Taylor had the puck sat at the top of the crease for him to poke it home and make it 4-2 at 56:58.

The goal ensuring the points would stay in Swindon and the Cats would take another step in ensuring they finish second in the NIHL National League.

Next weekend is the final weekend of regular-season action when the Cats travel north to Sheffield to take on the Steeldogs before hosting the Peterborough Phantoms in the final game of the regular season.

The week after that, the National League playoff campaign starts, and the Road To Coventry is well and truly upon us.