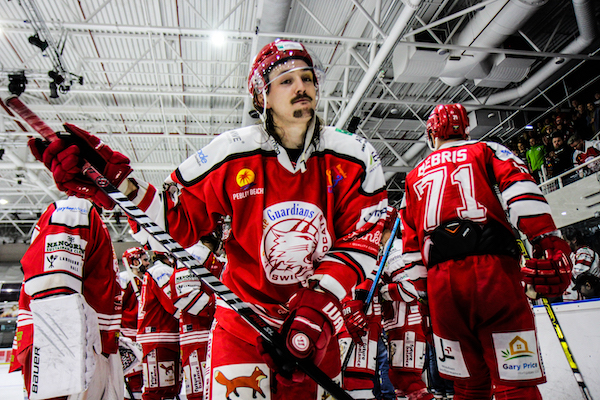 The Swindon Wildcats ended their four-game losing streak by beating the Bees 5-3 at the Link Centre, they then grabbed a point in Peterborough as they lost in overtime in a well-fought game.

Despite missing key forward Tomasz Malasinski the Wildcats still showed their class and battled hard to keep their place at second in the league.

The Wildcats were very much in control of the first period creating a lot of chances but the Bees were holding on.

But the pressure paid off as Emil Svec found space behind the back of the net and laid the puck to Chris Jones whose shot went top corner knocking the water bottle off at 17:38

The Wildcats then carried this momentum into the second period as Balint Pakozdi found some space and received the puck off Aaron Nell and rifled it past Goss at 21:13

This lead was then extended to three as Coach Nell found some space in the slot and backhanded it past Goss at 24:31

Just 33 seconds later Jack Goodchild did well on the forecheck to get the puck and slotted it in to give the Cats a four-goal lead!

Neil Liddiard then rolled back the years and dropped the gloves with Martin.

The Bees did respond well as William Stead latched onto a rebound to reduce the deficit to 3 at 37:45.

With a 5 on 3 opportunity for the Bees, they managed to get another one back with Josh Smith squeezing it past Skinns at 38:28

The Wildcats did manage to get their 3 goal lead back with Pakozdi laying the puck back to Nell who just managed to push the puck through Weller Evans at 48:17.

With 2:08 to go the Bees did get one back through Juha Lindgren but it wasn’t enough.

The Phantoms started the game very well with a lot of pressure on the Wildcats net.

Then on the power play they got their reward with Ales Padelek slotting the puck in from the wide-angle at 5:59

However, the Wildcats got back into the game through Svec who wrist shot the puck past Jordan Marr at 16:48

The second period was much more even with both teams going end to end.

Will Weldon then broke away and his initial shot was saved by Marr but he managed to get his stick onto the rebound to give the hosts the lead again at 25:47

Padelek nearly got his second as his shot pinged off the crossbar.

The Wildcats then came out very strong in the third period putting a lot of pressure on the Phantoms net.

They got their reward as Plews found some space and wrist shot the puck into the top corner to tie the game up at 46:49

With the game going to overtime the Phantoms did well to win all of the face-offs and had all the puck possession.

And it was Padelek again who received a pass from Billing and backhanded it past Marr to hand the Phantoms the extra point at 63:45.