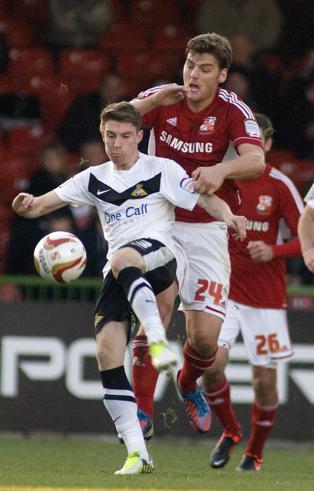 Matt Ritchie’s eighth goal of the season was cancelled out by an own goal from midfielder Danny Hollands, and though Town dominated much of the clash they were unable to snatch the three points on a frustrating afternoon at SN1.

The hosts made a bright start and took a deserved lead after eight minutes as Ritchie played a neat one-two with Andy Williams before curling a clinical finish past Gary Woods in the visitors’ goal.

And the visitors went close to taking the lead on 22 minutes as Iain Hume pounced on a mistake from Ritchie, but drilled his shot just wide of the post when he might have done better from 15 yards out.

Town then wrestled back the initiative and nearly regained the lead on two separate occasions before the break, as Hollands and fellow loanee Chris Martin were denied by post and crossbar respectively.

Paolo Di Canio’s side began the second period as they had ended the first, but were still lacking the killer instinct required to restore their advantage.

They came close on the hour mark as Williams pounced on a loose ball in the area but he was narrowly beaten to it by Woods, who managed to scoop it clear.

Town continued to make all the running as Doncaster seemed content with a point, but Joe Devera, John Bostock and the impressive Ritchie found Woods in apparently unbeatable form.

Substitute Gary Roberts squandered perhaps the best of Town’s healthy number of chances after 79 minutes, but he just couldn’t get the ball out of his feet after collecting a pinpoint Nathan Thompson pass, and the opportunity was gone.

There was still time for a few Town hearts to miss a beat late on as Wes Foderingham nearly let a speculative David Cotterill shot squeeze under him, but he managed to gather at the second attempt.

As the final whistle blew, Di Canio was left to reflect on another week without a win at home as he prepares his side for the trip to Oldham Athletic next weekend.