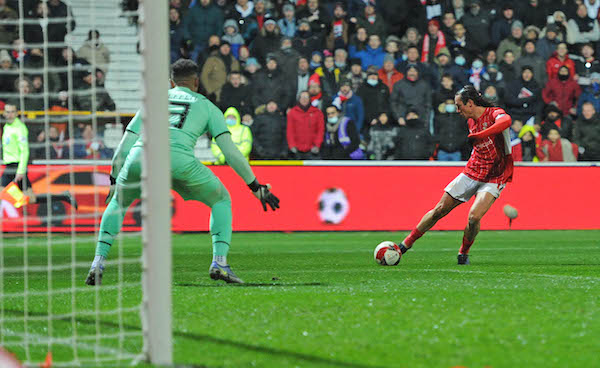 Ben Garner demanded his players play with bravery and insisted Swindon wouldn’t change their style of play to accommodate the Premier League champions. This approach has to be commended with Swindon scoring a well-worked goal against Man City and creating some good attacking opportunities that were unlucky to have not resulted in more goal attempts. Garner revealed that his players didn’t follow his orders with regards to playing the ball out from the back in the first half which is frustrating considering the way that the second goal was scored.

Making his first start since Colchester in the EFL Trophy, Ward endured an evening of highs and lows against Manchester City. He made some impressive saves throughout including a brilliant stop to deny Gabriel Jesus from the penalty spot but also was at fault for Ilkay Gundogans free-kick after he failed to set his wall up correctly leaving the midfielder with a massive target to aim at.

In front of the television cameras, Kaine Kesler-Hayden put in a performance that will have certainly raised a few eyebrows at parent club Aston Villa. Tasked with defending more than usual, Kesler-Hayden was brilliant in keeping Jesus quiet and almost raised the roof as much as Swindon’s goal did with his tracking back tackle on Kevin De Bruyne in the 65th minute.

Deservedly kept his place in the starting side and had to stay alert at all times with a large proportion of City’s attacks coming through his channel. It’s hard to remember Hunt doing much wrong albeit Swindon conceding four times, but Hunt can take confidence in knowing he was able to win a handful of tackles against Premier League opposition.

In his first game back from suspension the club Captain did well to organise Swindon’s defensive line and looked calm when defending deep in his box. Relieved danger for Town on numerous occasions as he defended crosses well with defensive headers and blocks but also took too long on the ball at times when a quick pass when required. A good outing for the skipper who deserved to play after his commitment to Swindon Town over the years.

Akin Odimayo appeared to find it hard when dealing with the high press of Manchester City that in turn caused him to pass back to goal on occasions when fans craved for a forward ball into Swindon’s midfielders. It’s difficult to criticise given the scale of the opponent that Town was facing and Odimayo can be proud of the fact that Swindon’s defence wasn’t embarrassed by City’s star-studded attack.

Revealing in the week that his family are now die-hard Swindon fans, Iandolo was active all night in getting forward down the left-wing and tracking back when out of possession. Got skinned by Cole Palmer on the wing as the 19-year-old set up City’s first goal but it was interesting to see the battle between these two players as Iandolo at times disposed the youthful winger. Got forward well as Swindon pushed for a goal and put a few delightful crosses into the box that deserved an attackers touch.

Can’t be blamed for the second goal despite his heavy touch due to the ball being fizzed at him by Ward as City scored their second. Reed was always looking for the forward pass and despite rushing his delivery at times did well to navigate around the high press of Manchester City as the midfielder was denied the time on the bar he usually gets. Delivery from set-pieces was below the standards Swindon fans have come to expect but it was a positive all-round performance from the talented Reed who Swindon will look to tie down to another contract.

Back in the starting team in place of the injured Jack Payne and unfortunately looking just too much of the pace as City pulled Swindon apart for large periods of the first half. Gladwin tried to get Swindon playing on the counter-attack and did well in his defensive duties at times with the midfielder not afraid to put in a crunching tackle.

If you watched Jordan Lyden play last night then you wouldn’t believe me if I told you this was just his first consecutive start of the season. The Australian was excellent as he was deployed in a more attacking midfield role and looked to disrupt Man City’s defence with late runs into the box. Linked up well with Swindon’s attackers and was always looking for a forward pass even if City’s recovery off the ball rarely allowed for this. Lyden has been superb in his last two outings and if he can avoid injury will play many more times for Swindon this season.

You have to feel for Tyreece Simpson as he went large spells without the ball with Manchester City predictably dominating for large periods of the match. When he did receive the ball, however, Simpson was always looking to either try and turn his man or play a pass into McKirdy. Failed to test Steffen between the posts but should have had a penalty in the 66th minute after being brought down by Dias and Cancelo.

Buoyed on by his four-goal haul against Northampton, McKirdy took his chance when it came to him and brilliantly dispatched a powerful shot at Steffen’s near post to score Swindon’s only goal of the match and create a cauldron of noise inside the County Ground. McKirdy often had to receive the ball in the air as teammates looked to pick him out on the counter-attack but he got his reward in the end for his tremendous efforts in both attack and defence before being substituted late with cramp. Get this man a new contract now!

Williams made a difference when he came on with his ability to get on the ball in midfield and run direct at City’s defence creating the opening for McKirdy’s goal. Assisted with a perfectly weighted pass into McKirdy and will have been frustrated not to have started after a late fitness call was made on the Welshman.

Replaced Akin Odimayo in the 70th minute with Swindon already three-nil down but gave a good account of himself up against Man City’s attackers. Looked confident on the ball and managed to get a head on Swindon’s free-kick just after Town scored but he couldn’t navigate his effort on target.