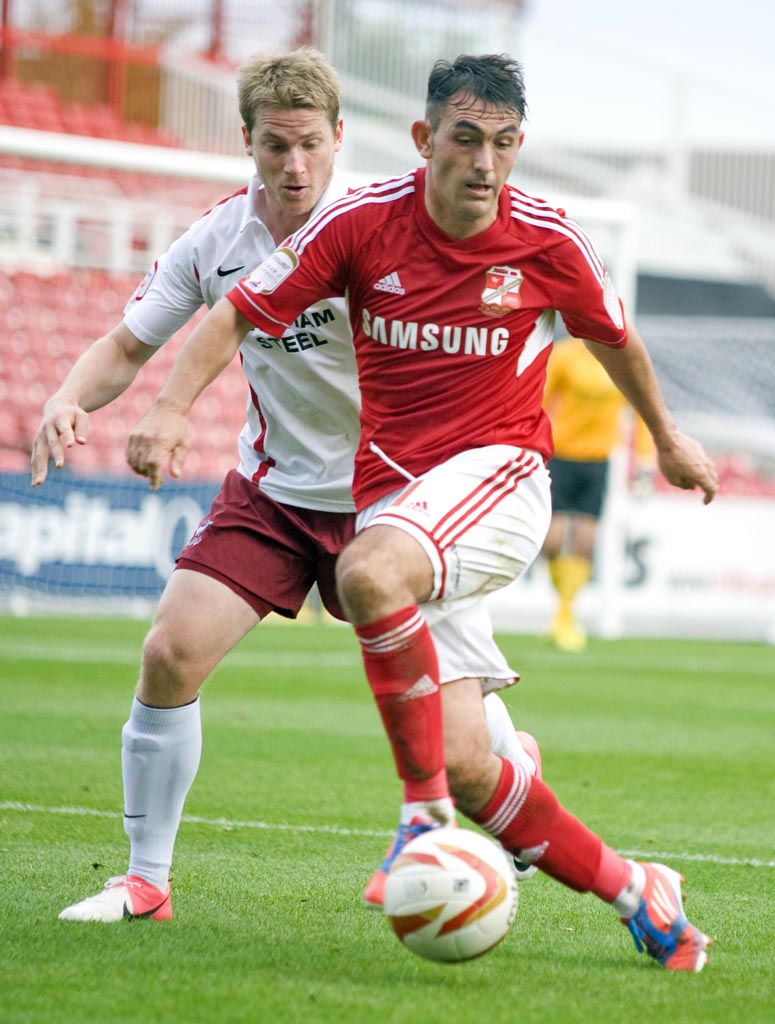 10-man Town had to settle for a home draw for the second week in a row after Scunthorpe United came from behind to claim a point at The County Ground on Saturday.

Paolo Di Canio’s side were not helped by the 33rd minute sending off of Aden Flint for a second bookable offence, but they will be disappointed to have squandered a couple of excellent second half chances to take all three points.

The manager made one change to the side that drew 2-2 with Coventry City last weekend with James Collins restored to the starting line-up in place of John Bostock.

Both teams looked sluggish during the opening exchanges, but it was Town who struck the first blow when Collins notched his second goal in as many games on 18 minutes.

The striker latched on to a precise through ball from Simon Ferry and cut neatly inside Scunthorpe left-back Tom Newey, before slotting under Sam Slocombe to make it 1-0.

Town began to enjoy the better of the game after taking the lead, but were rocked when Flint upended Leon Clarke on the edge of the box to pick up his second yellow card.

Flint cut a disconsolate figure as he left the pitch, but in truth could have no complaints after having piled into the back of Clarke earlier in the half to receive his first booking.

Di Canio’s hand was inevitably forced into making a change, with Paul Benson sacrificed for the fit-again Alan McCormack.

Despite their numerical advantage, the visitors struggled to make an impression for the remainder of the first period and with Town wasteful in possession, it made for a fairly drab affair.

This trend continued into the second half, with Robbie Gibbons' wayward 20-yard effort for the Iron the only hint of a chance for either side.

But it was all square after 56 minutes, as Scunthorpe capitalised on a good spell of possession to grab an equaliser.

Experienced striker Karl Hawley rose highest in the Town box to glance an inch-perfect cross from Mark Duffy past Wes Foderingham and into the corner.

This might have signalled an onslaught from Alan Knill’s side, but it was 10-man Town who proceeded to create the best of the game’s remaining chances in what had become a scrappy encounter.

First, Gary Roberts twisted and turned to make space for himself on the edge of the area before whipping a right-footed shot narrowly over the bar after 79 minutes.

Then substitute Adam Rooney wasted the hosts’ best chance to snatch the points with five minutes remaining as he surged powerfully into the box only to drag his right-footed effort wide when one-on-one with Slocombe.

This proved to be the last opportunity of a turgid clash at the County Ground which was helped neither by the unavoidable dismissal of Flint, nor by bitty, disjointed displays from both sides.