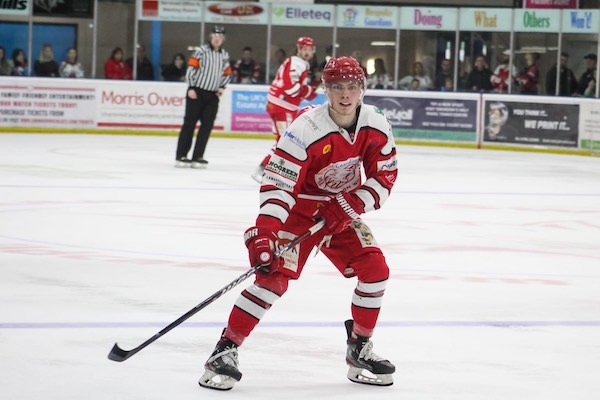 Following the announcement earlier this week that Dean Skinns has put pen to paper for 22/23, The Bespoke Guardians Swindon Wildcats are pleased to confirm that Reed Sayers has also extended his stay in Swindon for another season.

Reed, a product of the Swindon junior system, saw his breakout chance for the senior Wildcats come in the 2021 Spring Cup where posted 6 points in 12 games before getting his first full season in 21/22.

Last season, in all competitions, he posted 21 points in 65 games as he tasted senior hockey for the first full year. Having come up through the junior system at the Link Centre, he’s also iced for Okanagan Hockey Academy as well as some time with the Cardiff Fire in 2019-20.

Having scored impressive numbers throughout his junior career, Reed will be continuing his development over the course of the 22/23 campaign.

“Bringing Reed back was important for us. He had a good year last year and I think it was easy to forget it was his first full season at this level, it was always going to be an adjustment for him. I think he’ll take his development to another step this season and will be a vital part of our team.

We’re always looking to the future here and someone like Reed can be a huge part of the Wildcats core in years to come and I’m excited to see what he’ll bring to our line-up next year. With more experience playing against National League sides I think he’ll have a good season for us.”

As well as Reed putting pen to paper, we’re thrilled that The Training Fox will once more be sponsoring him for the new campaign. They have been loyal sponsors of the team for a few seasons now and they really go above and beyond to support the team and their players!