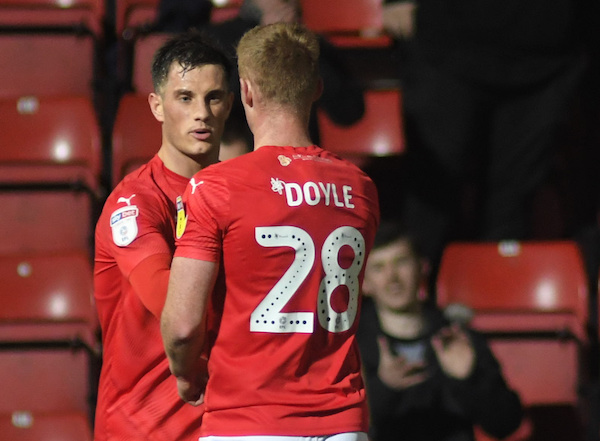 SWINDON TOWN navigated their way through an awkward fixture against Scunthorpe Unite tonight to run out two-nil winners and increase their lead at the top of the League Two table to six points. A brace of goals from Eoin Doyle wrapped up the three points to maintain Swindon's stranglehold on top position.

Had to deal with quite a few shots as the game progressed but Scunthorpe’s inability to strike the ball with any power made it a relatively comfortable evening for the Swindon shot-stopper.

Effective in defence throughout the first-half but was disappointing with his balls forward that too frequently failed to find their desired target. Eventually got into his rhythm during the closing stages of the half with some beautiful play inside the Scunthorpe box in the 33rd minute almost resulting in a goal.

Hit the crossbar from a dead-ball situation moments later. Continued to improve in the second-half with some smart link-up play as Swindon ran out deserved winners.

Looked a bit shaky at times throughout the first-half and failed to deal with high balls when put under pressure by Scunthorpe’s attackers. Appeared uncomfortable in partnership with Broadbent at centre-back, but made some crucial interceptions when Scunthorpe looked through on goal.

Making his first appearance since Swindon’s one-nil away win over Northampton at the start of February and had to remain strong throughout the first half against Miller. Dealt with the high-ball over the top well but looked nervous when put under pressure inside his half.

Too often attempted long-balls but a lack of accuracy saw his efforts frequently intercepted. Kept a clean-sheet however and must be respected for this.

Bombed forward down the left-wing well as he frequently overlapped Jaiyesimi to create space on the wing. Delivered a couple of half-decent crosses into the box but was often isolated in defence with Jaiyesimi failing to trackback. Scunthorpe seemed to change tactics in the second-half as Fryers was rarely tested.

Demonstrated his experience to help manage the game for the hosts as Swindon maintained a clean-sheet.

Wasn’t at his usual best when attempting to break up play in the opening stages of the match as he failed to stop Scunthorpe’s runs from deep. Improved as the match went on but his complacency on the ball allowed Scunthorpe to put pressure on the Swindon defence. Used his experience to help guide Swindon to victory in the second-half.

Was poor defensively throughout the first-half but remained calm when in possession to get Swindon out of some tricky situations. Took too long with his decision making at times in what was a slow-tempo game. Seemed a different player after emerging for the second-half and was Swindon’s biggest threat when on the ball.

Drove forward when in possession and his assist for Doyle’s second goal was exceptional as he split the Scunthorpe defence open with a reverse through ball.

Rarely threatened throughout the first-half, showed glimpses of his attacking talent in the second period of play with some decent crosses into the Scunthorpe box but Town couldn’t convert. Subbed off in the 60th minute.

Assisted Swindon’s goal with a delightful chipped cross to Eoin Doyle at the back-post. However, this was a frustrating performance from the Norwich loanee as a lack of urgency saw him often dispossessed. Lacked quality in the final third at times but an important showing nonetheless.

Never really got into the game, had a chance in the first-half but was deemed offside. Ran tirelessly to try and create openings but rarely threatened. Put in the yards defensively and worked hard to help out Swindon’s defence when required.

In true Eoin Doyle fashion, he scored two goals without actually doing much. Rose highest in a crowded penalty area to put Swindon in front and should’ve had a second in the 57th minute but failed to convert from close-range.

Latched onto a cute reverse through ball from Doughty in the 76th minute to chip over the keeper from six-yards out and wrap up the three points for Swindon. A typical performance from the Irishman.

Replaced Isgrove in the 60th minute but had little impact on the game. Used his pace to make runs in behind but Swindon looked set on holding out for the win.

Great to see him back after his injury lay-off and was creative in the final third for Swindon.

Came on with little time remaining to make his debut.