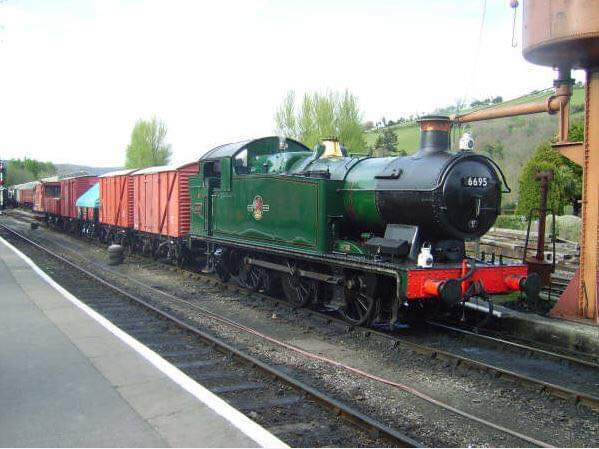 The Swindon & Cricklade Railway are very pleased to announce that 6695 Locomotive Ltd have come to an agreement with the S&CR to move their locomotive ex-GWR 66XX 0-6-2T No. 6695 to the railway’s home at Blunsdon Station.

The engine was originally based at Swanage Railway but was damaged in an incident with the low loader transporting her to the West Somerset Railway Spring Gala in 2015 and she has been at Williton ever since.

Nigel Clark, a member of 6695 Locomotive Ltd, said “She was due to be withdrawn at the end of 2015 for her planned 10-year heavy overhaul, so it was started early to also tackle the repairs needed. Following the WSR’s difficulties, our 25-year agreement with them was recently terminated.”

6695 was built for the Great Western Railway to lot number 255 and given works number 983 by Armstrong Whitworth, completed in October 1928. First shedded at Tyseley, moving to Leamington in April 1929.

6695 then moved to South Wales in 1939, shedded mainly at Landore (Swansea) and at Swansea East Dock. Then she was transferred from Landore to Neath Cwrt Sart around 1960, and further to Radyr for her final few months before withdrawal and her short, final journey to Dai Woodham’s scrapyard in 1964.

6695 will complete her overhaul at the Swindon & Cricklade Railway and will be our main locomotive whilst the railway works on commencing the overhaul of resident locomotive Tkh 3135 “Spartan”.

Allan Bott, Publicity Manager for the S&CR mentions, “This is fantastic news for the S&CR and gives us a much-needed morale boost following the recent departure of Owsden Hall. We recently hired 5619 and have been commended for maintaining it and keeping her in running order. Having 6695 Locomotive Ltd move here is a testament to our hard work and we look forward to working with 6695 Locomotive Ltd for many years to come.”

Find out more about the Swindon & Cricklade Railway HERE!

The Swindon & Cricklade Railway offers a round-trip passenger journey of approximately four and a half miles within the Wiltshire countryside.