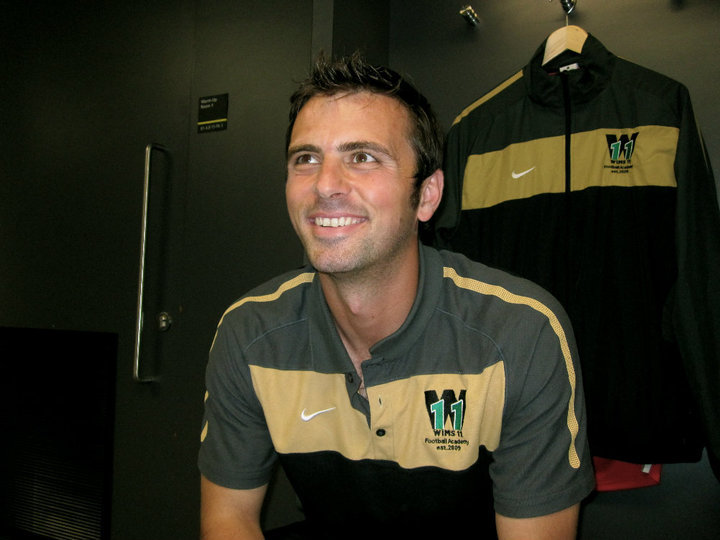 As a former footballer, Shaun Wimble knows a thing or two about the beautiful game. On his return from Canada in 2008, Shaun decided to channel all of his time into coaching and thus Wims11 Football Academy was born. We chatted to Shaun about his career, coaching and the success of his football academy.

You’re the Director and Head Coach at Wims11 Football Academy, tell us a little bit more about the academy?

The Academy was set up because I wanted to influence football coaching in Swindon and install my own coaching philosophy. It also gave me the chance to spend more time with my boy, Billy, who is the inspiration behind it all. Each programme has been set up to include him. I never dreamt that the company would be as big as it is today.

Why do you think it’s important to get kids involved in sport?

Sport at any level is important for well-being, confidence and social skills. With the modern world the way it is, going out to play in a non-structured environment, like we did on the streets, is very limited so being able to replicate that in a structured, safe and secure environment keeps the opportunity to ‘just play’ alive.

What’s the most rewarding part of your job?

The greatest reward is seeing the fun that every child and adult has when taking part in one of our sessions. Of course the growth is hugely rewarding but it’s the impact my philosophy has had on our players and the family atmosphere that hasn't changed since our first class 5 years ago.

Do you think it’s important for parents to be 'sporty' themselves? Does this make any difference to a child reaching his or her potential?

Children follow their parent’s lead, so being sporty or having an interest will most definitely rub off on them. For me personally, I grew up surrounded by sport and taking part in all sport, so as a parent I do everything in my power to encourage my own children to take the same route.

How did you become involved in coaching?

I started coaching in my early twenties working with Swindon Town’s centre of excellence. After moving into the semi-professional game, I moved to Canada in 2005/2006 to take a full time coaching role before returning in late 2008 to set up Wims11.

How would you describe your coaching philosophy at Wims11?

In one word, FUN - our coaching philosophy is to create a safe, secure and fun coaching environment with the opportunity to play or be involved at all times.

Football is generally portrayed in the media as a pretty male-dominated sport, what would you say to young girls to inspire them to get involved?

Football is a great sport to be involved with and it is very difficult, in the UK, to encourage girls directly. It is the parents that hold the biggest influence. After spending so many years in Canada, it’s clear for me to see how different the two countries compare, over there, girl’s football is huge! One of our biggest challenges is trying to get mums on board, who see dancing or more traditional ’girly' activities as the way it should be.

After their disastrous World Cup performance, what do England need to do to reach the late stages of Euro 2016?

For me the results were disappointing but the performance and the way England played was far better than in previous tournaments. To reach the later stages they don’t need to do much differently other than defend better as a team. To win it we need to overhaul minor and grass roots soccer and encourage more technical training and being on a ball from an early age.  We regularly watch children as young as 4 or 5 going off to join teams to play matches and even though they are classed as friendlies the amount of time spent on the ball is very small.

What was your greatest achievement on or off the pitch?

On the pitch making my professional debut in Calgary in the USA league or scoring live on Fox sports. Off the pitch my greatest achievement is setting up Wims11 and generating such a fantastic reputation.

If you moved away from Swindon which 3 things would you miss the most?

Being able to watch STFC with my son, friends and the feeling of ‘home’.

Wims 11 is a local football academy in Swindon providing various soccer programmes for all ages, genders and abilities.