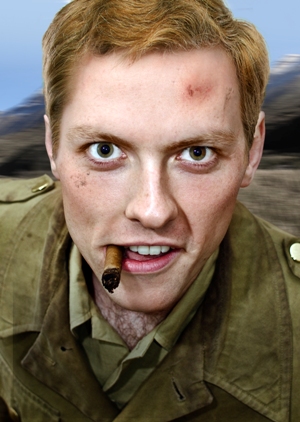 Ahead of September 10th's performance of 'Winston on the Run' at the Swindon Arts Centre, we spoke to the show's writer and star Freddie Machin about his fascinating one man show.

You have an impressive CV:  playwright, actor, librettist - which is your favourite of these?

It is tough to say which is my favourite out of these. I think that they all require the same muscle, which is storytelling but the processes appeal to me in different ways. The best moments in the journey towards creating and telling any story is collaborating with other people which I did a lot of on Winston from the amazing talents of John Walton the director and Harri Chambers our sound man to Martin, our award winning designer. Everybody wants to tell the best, most exciting story we can but all coming at it from different angles.

What inspired you to write this play about a young Winston Churchill?  It sounds really gripping and as a great admirer of Churchill the Statesman it sounds as though it will give us an insight into one of England`s greatest heroes.

I hope so. The idea behind the play was to peel away some of the layers of the great man. The image we all have of him in later life and the sound of that deep voice, textured with brandy and cigars is so definitive that I think most people forget that Churchill was a young man at all. I certainly did. John initially saw a picture of Winston in his hussars uniform at the Churchill War Rooms in London and couldn’t believe that this was the person that would go on to unify a nation and inspire so many to victory. Our initial research was fascinating and full of discovery about this awkward, ambitious and boisterous young man. He was exceptional in many ways, not least that he was useless at school. Made a mockery of by his teachers at a tender age to one of Britain’s all time heroes - what a journey!

I understand the play previewed at last year`s Edinburgh Festival - have you performed there before and how did you find the experience?

I am a big fan of Michael Sheen and Toby Jones both of whom I have met and been very star struck by. When I met Mr. Sheen he extended his hand and said, “I’m Michael” to which I responded gormlessly, “I know.” - not my finest hour. Tim Price is a cracking new playwright. I also love Phillip Lohle’s play Das Ding and Annie Baker’s Circle, Mirror, Transformation.

Do you have an inspiration/muse?

The artist Chuck Close says “Inspiration is for amateurs, the rest of us just come in everyday and get the work done” which I think is a good creative mantra to live by. Churchill was certainly defined by his resoluteness and persistence. Having said that, there are things which inspire me but they are ever-changing. Currently pushing my creative buttons are Mad Men, Our Friends in the North and ER series 1.

When not performing how do you like to spend your spare time?

I have recently joined a tennis league for the first time in my life and love to play. I am also a keen cyclist having watched Miguel Indurain win the Tour de France for most of my youth.

Do you have any new exciting projects in the pipeline?

A film version of my first play Chicken is currently in production which is very exciting and a play which I co-wrote 12 Miles From Nowhere is also on tour this autumn.

What is the best piece of advice you have ever been given?

Hamlet says: “There is nothing either good or bad but thinking makes it so”. That is not strictly advice given to me but it certainly sticks in my mind. Anything that puts you in the driving seat is good advice. One of my tutors at drama school also said “you are your own agent of change” which essentially means – if you want it, go get it.

Who is the most famous person in your phonebook?

Ooh, that’s a good one. Well, I did have Terry Christian’s (1990’s TV presenter) number after I met him at an awards thing otherwise my mate Phil is pretty big in Australia.

A hundred and one things!