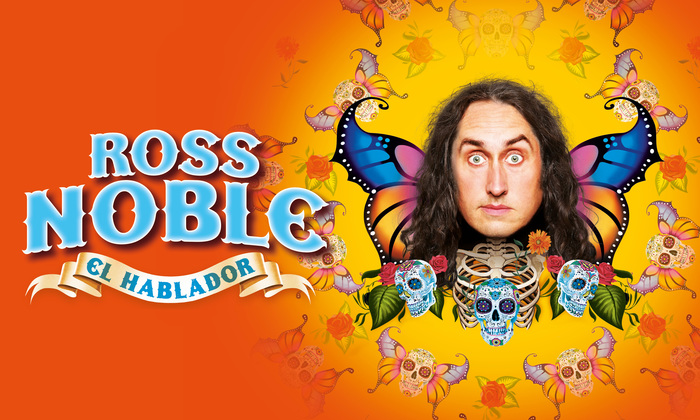 Ross Noble likes to keep his fans on their toes. For more than 20 years the Geordie comedy wonder has been spinning spontaneous stand-up, regularly touring the globe and playing to packed houses.

In a Ross Noble show, the mischievous comic takes his audience on a meandering journey full of ridiculously funny stories, whimsical tangents and offbeat observations – and his unique brand of semi-improvised stand-up has won him a legion of fans.

But just when it feels like the 42-year-old comic’s career is becoming predictable, he steers into completely new territory. Quite literally, in the case of his Dave TV shows – ‘Freewheeling’ and ‘Off Road’ – that follow him on motorcycle adventures. But more recently in Mel Brooks’s West End musical, ‘Young Frankenstein’, which saw him nominated for an Olivier and win a WhatsOnStage Award for Best Supporting Actor in a Musical.

Now, Noble’s ditched the choreography and is back on the road with a brand new stand-up tour, ‘El Hablador’. We talked to him about Christmas albums, giant skulls and working with Mel Brooks.

This is your 16th UK tour, with 68 dates announced so far. After 20 years on the road, do you still enjoy travelling the country?

‘It would be hard work if I didn’t! Is that how many shows it is? That seems like a daft number – I’ll put on two extra dates, just to make it up to 70. But, yeah, I do still love it. The great thing about stand-up is you’re face-to-face with real people.’

You’ve said that when you started touring you ‘didn’t really live in the real world’. Has that changed?

‘When I started all I did was tour – I was just a vessel. I’ve got more of a balanced life now, but I can still retain the essence of being in the moment. I realised quite early on that stand-up can teach you everything you need to know about life, which is: have one eye on the future, and have one eye on the past, but live in the present.’

How would describe what your stand-up now compared to your early days?

‘When I started people said I was “surreal”, and that’s a bit of a lazy description, because it sort of implies that anyone could do it. Now, I think I take the building blocks of the real world and then stretch and manipulate them. It’s more like “magic realism” than “surrealism” – that’s the way I see it… And that’s the most pretentious thing I’ve ever said!’

You recently recorded a spoof magazine show for Radio 4. How did you find writing that compared to stand-up?

‘I enjoyed the discipline, and creating something that is incredibly detailed and precise. Some people get writer’s block, whereas once I get an idea of something I want to do, I just got for it.’

In your Dave TV show ‘Ross Noble: Off Road’, you put yourself and your motorbike through the gruelling Scottish Six Days Trial. Did you take much convincing to do it?

‘That was something that I was doing anyway! We went to the channel and said, “We’re doing this, shall we film it?” and they went, “Definitely!” Hopefully we can do another series. I’d like to, but we can only really do it if we can up the ante.’

On the opposite end of the spectrum, you recently showcased your singing talents in ‘Young Frankenstein’.

‘And my dancing! I was Olivier nominated, you know? But I don't like to talk about it… [Laughs]’

How did you find working with a living comedy legend, Mel Brooks?

‘Mel was phenomenal. He constantly tinkers with everything, changing punchlines around, cutting entire scenes…’

He’s 92 now. Did he show any sign of approaching retirement?

‘Not at all. The last time I spoke to him he was talking about projects that he passionately wants to do. Even though he’s got this incredible body of work – and he’s aware of that, because he keeps reminding you that he’s a living legend – he’s not hung up on the big picture, he’s all about the detail. He’s just as bothered about the nuance of it all.’

After singing and dancing, how have you found transitioning back to solo stand-up?

‘It is nice to be doing it again, because I feel like I’m exercising different muscles – still comedy muscles, but different types of comedy muscles. On stage the transition’s been fine, but off stage it’s been a bit weird.’

Because you’re no longer part of an ensemble?

‘Yeah, but not just an ensemble, a real world-class team. Going back to being just me, making all the decisions – in one way it’s the ultimate freedom, but sometimes giving yourself a restriction can be quite liberating in itself.’

After an Olivier nom, have you thought about incorporating any songs into your other work?

‘What, like releasing a Christmas album? I’d like to do more musicals, if the right thing came along – I enjoy it. But just because you enjoy singing doesn’t necessarily mean you should. Though I do have a couple of ideas for things that are not quite musicals, but sort of musicals, which I’m working on, but I won’t say what because it’ll jinx it or something!’

That sounds wise. Something you can talk about, then, is ‘El Hablador’. What do you have in store?

‘I’ve got a giant inflatable skull on stage: its mouth fills up with smoke and I walk out of it!’

Outlandish inflatable sets have become a trademark of your stand-up shows. How did they start?

‘The sets have always been a bit “Spinal Tap”, there’s no need for them, it’s just funny to have these big, over-the-top creations on stage. People turn up and go, “Woah!” and then I don’t really mention it.’

Can you see yourself still working at 92, like Mel Brooks?

‘Having spent time working with Mel, I can, actually. Sure, he’s had more success than any other comic on the planet, so you could say, “Of course he’d still be going!” But I do look at him and think: there really is no reason to slow down.’

Ross Noble: El Hablador is on tour from 9 September and stopping at the Wyvern Theatre on Tue 25 and Wed 26 September. Tickets available now at swindontheatres.co.uk.