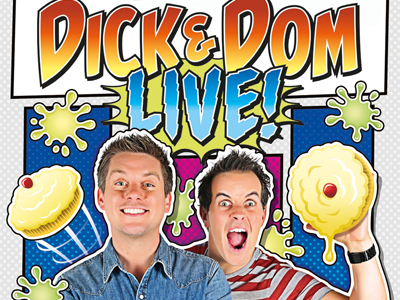 Legends of Children’s TV, Dick and Dom are bringing their largest ever UK tour to Swindon’s Wyvern Theatre, just in time for the Easter Holidays! But be careful, things could get messy!

You’ve been together as an iconic duo for twenty years; how would you describe your careers together up to this point?
Messy! Being in showbusiness has been one big rollercoaster of a ride, we've had ups and downs but it's great that we've remained good friends and are still working together and hopefully for another 20 years more!

Dick, you’re Godfather to Dom’s child, so you’ve obviously forged a great friendship and working relationship, but what can you tell us about the first time you guys met, What were your first impressions of each other?
We met at the BBC in The Green Tea Bar (The Bacon Roll Cafe!) We just got chatting and realised we were a similar age and shared the same sense of humour!

Looking over the last twenty years, what have been your highlights?
Dick and Don in da Bungalow has to be out "New York, New York" moment.

What’s been the one thing that has stuck with you with the public over the years? Can you go anywhere without someone yelling “Bogies” at you?
Definitely Bogies! There isn't a day that goes by where we don't have it shouted at us. It's found a whole new audience on YouTube and is still as well known today.

I’m making you sound like this is the farewell tour! I’m sure you’re as busy as ever, tell us about this tour, what’s the story behind the show?
We've been doing the show for about five years at festivals and Butlins resorts. It started from a small idea when we did warm up of splitting the audience in half - nothing new in showbiz - but we felt we could expand it and turned it in to a 'versus' show. It's Dick's side of the audience vs. Dom's side. Dick vs Dom. It's in the style of a boxing match and the two sides compete against each other to win points. Lots of old games that we've played over the years and some great new ideas too!

What can mums and dads expect, and what can kids expect?
It's a show for the whole family, so everyone can join in. There is something for everyone of all ages. Our humour has never been just aimed at kids so the parents will find it as funny.

How’s life on the road? What’s touring like?
We live on motorway service station food! But it's a good laugh to be out on the road working with your mate and taking the show to places we've not performed before.

Did you know anything about Swindon before you decided to bring your tour here?
Gilbert O'Sullivan comes from there.

I know this tour takes your right up until the end of October, will you be taking time of to relax or are you straight on to your next adventure? What else are you working on, or what’s next for you after the tour?
During the tour we will be filming series 3 and 4 of Diddy TV!

What’s the best way to stay in the loop with all the latest things you have going on?
Twitter: @dickndom
Facebook: Dick and Dom (Official)
Instagram: @dickndompics