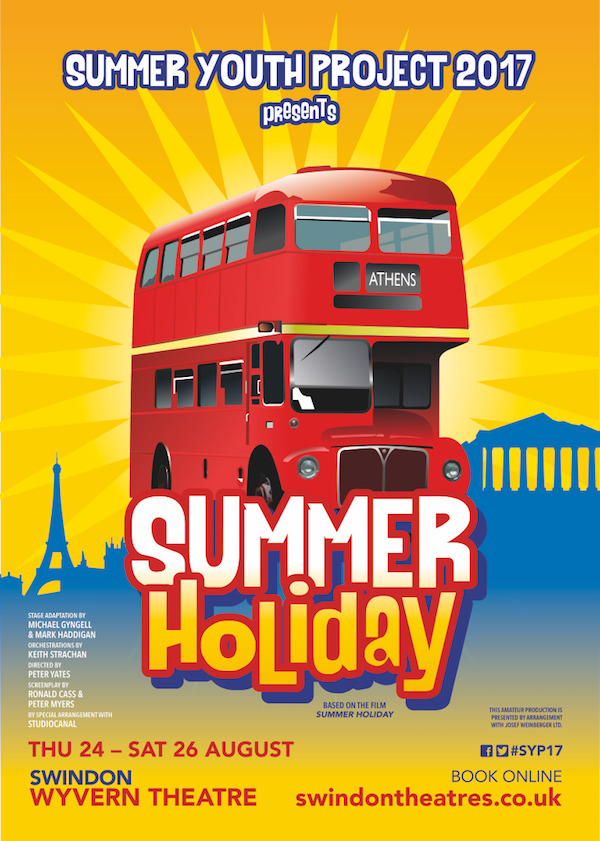 It was a beautiful summer evening in Swindon, perfect to don a pair of shorts and a funky Hawaiian shirt and take a trip the Wyvern Theatre to enjoy the ever-popular Summer Youth Project’s latest production, Summer Holiday.

The Summer Youth Project takes young people between the ages of 9 and 21 and provides the experience of producing some of stage and screens’ best-loved shows. From treading the boards and performing huge song and dance numbers to the backstage production staff that make the magic happen, the Summer Youth Project is a fantastic way to bring all the fun of the theatre to local young people of all abilities to make friends and have fun.

This year, the SYP brought the 1963 hit Cliff Richard film Summer Holiday to life. The story follows a group of London Bus mechanics as they look forward to a trip to warmer climbs, only to have their plans scuppered by a sudden lack of money. However, after a brainwave from the gang’s leader, Don (played brilliantly by Cirencester College student, Ethan Hughes), comes up with the idea of running a London bus tour across Europe!

The boys find themselves taking a detour to help three damsels in distress, getting in to trouble with border guards, crashing a wedding as well as harbouring a stowaway, all in the name of having the perfect Summer Holiday. The show even saw a full-sized London bus (and a tiny, “in the distance” version) take to the famous Wyvern stage! An incredibly impressive feat of engineering, logistics and manoeuvring from the stage team.

With familiar musical numbers, even to me who hadn’t seen the show before, this show truly had something for everyone. The SYP have again shown that Swindon is lucky to have some of the most talented young people around!

It’s incredible to think that such a large-scale production is put together in less than two weeks! The Project is enjoyed by over 120 young people from all across the area and is proud to be able to provide bursaries to those who may not have been able to be involved otherwise.

Another year and another triumph for the SYP and Wyvern Theatre. Definitely one to get in the diary as soon as the dates are announced!