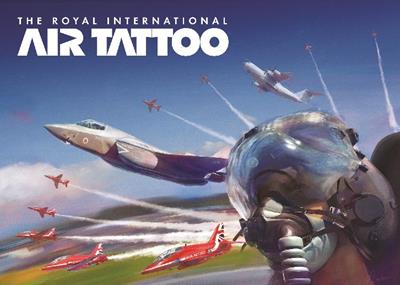 Three of the hotly anticipated stars at this summer’s Royal International Air Tattoo at RAF Fairford feature evidently in powerful new artwork which was unveiled by organisers today.

In the eye-catching image, the RAF’s new state-of-the-art stealth fighter – the F-35 – and the legendary Red Arrows are prominent, along with the RAF’s latest heavylift aircraft, the A400M.

Created for the first time by CGI expert Wiek Luijken, the Air Tattoo poster combined his expertise in computer generated images with his passion for aviation.

Air Tattoo Head of Marketing Helen Webb said she was delighted to add Wiek to the list of illustrious artists who have captured the thrills and excitement of the Air Tattoo since it was first staged in 1971.

She said: “We commission new artwork each year and many of these, by renowned aviation artists such as Wilf Hardy, Philip Castle and David Bent, have become iconic. I am sure Wiek’s poster will be equally popular.”

Wiek has been creating aviation art for big print, calendars, book and model box covers, game illustrations and magazine articles for more than 20 years. He works full-time as an Art Director in the games industry and uses aviation art as a creative outlet in his spare time. Wiek also has a passion for classic aircraft, with a special interest in British and Dutch historic military aviation.

Helen added: “We were aware of Wiek’s work and very much liked his style. He loves aviation and this passion comes over clearly in the images he produces. Furthermore, he’s created the artwork in a way that enables us to use it across many mediums - from tiny web banners through to giant roadside posters!”

Wiek said: "It’s such an honour to create artwork for an event such as the Air Tattoo, one of the world's greatest airshows! At the same time, the challenge of stepping in the footsteps of legendary aviation artists such as Wilf Hardy was slightly terrifying. I have tried to pay homage to their style whilst adding my own twist.

“Creating the poster gave me the opportunity to step outside my comfort zone as I am more used to featuring historic aircraft. Last year the A400M blew me away with a stunning display, giving the fast jets a run for their money. I couldn't help but put in the Red Arrows as well, they never cease to amaze with a vibrant display of British colours and are always a highlight of the show. It has been an absolute blast creating this artwork!"

Last week it was announced that Lockheed Martin’s F-35B Lightning would be making its international flying display debut at the Air Tattoo.