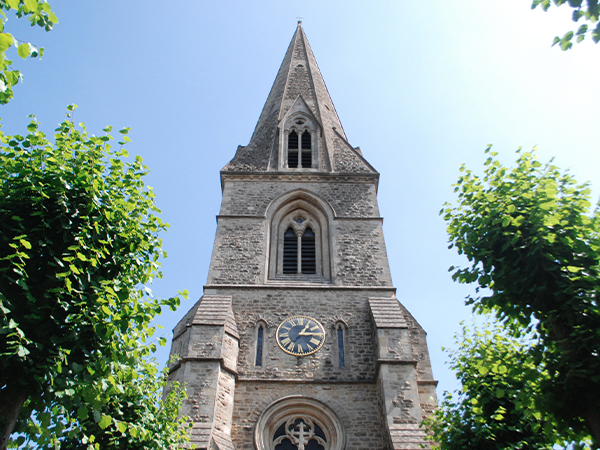 Positioned on a limestone hill Swindon was originally an Anglo-Saxon settlement, whose name is believed to be derived from the old English words "swine" and "dun" meaning "pig hill".

This hill set settlement was later to become the centre of the town for trade until its growth around 1848. Turning the town on the hill into old as new parts developed to accommodate the railway works.

Today, Old Town is seen as somewhat of a cultural hub. Home to an array of restaurants, independent stores, and long-standing businesses. As well as its historical neighbouring buildings.

The name “Goddard” frequently features in both the streets and buildings of Old Town, due to the families lengthy 400-year residence in the area. The Goddard’s were lords of the manor of Swindon from 1563 – 1927. Residing in the Goddard state of The Lawns. Their manor house, once known as Swindon House, was built in 1770 on the site of a former medieval manor. The name of which later changed to that of which we know today, The Lawn.

The Goddard’s elegant Georgian home which included bedrooms, dressing rooms, nursery and servant quarters remained in the family until 1931. When widowed Eugenia Kathleen left the town. Four years after her husband the last in the male line, Major Fitzroy Pleydell Goddard, and diplomat’s death in 1927.

The house remained empty until its occupation during World II by British and American Forces.

In 1952 the derelict house was demolished, and The Manor grounds opened as parkland. The only remains of The Manor are the woodland, lake, garden, parts of the walls and the gateposts at the entrance to Lawns.

All of which provide a small insight into the majesty of Goddard’s former home in its early years.

Swindon hospitals and the NHS

Before the building of the modern Great Western Hospital in 2002. Swindon’s population were served by the Princess Margaret Hospital on Okus Road, the first large general hospital to be built under the NHS.

An irony which cannot be overlooked, as some have suggested that Swindon provided the blue prints for the NHS with the GWR version of a Health Service funded and supported by staff from the Great Western Railway.

As we delve into the history of Old Town, it is possible to make links with former residents and buildings. With the construction of The Locarno / Corn Exchange as one such example.

The Locarno was commissioned in 1852 in response to a decision to build a Market Hall in Old Swindon in 1848. Built as a public room the building could accommodate up to 600 people for public meetings, balls, lectures and readings. And was designed to additionally provide accommodation for the County Court, Petty Sessions and other public businesses. Later becoming Swindon's defacto polling station and election house.

In 1865, Ambrose Goddard released more land next to the building to erect the Corn Exchange a building which included an 80ft tower (possibly the tallest point in Swindon) and a triangular market hall covered by a glass dome.

Driven by the New Swindon Local Board, proposals to build new public offices in York Place were presented. With the belief that offices central to both the Railway Village and the Hill will be beneficial both strategically and psychologically. New Swindon Town Hall was constructed in 1890, with all civic functions being passed down to the building by 1891. Establishing a new landmark building in the new town still visible from the Old Town area.

The Corn Exchange hall went through many transformations, first being turned into a 1000-seater theatre, then an ice rink and later in 1919, a cinema with seating for 1,000 people. After refurbishment in 1949, it became the Locarno Dance Hall, hosting wrestling events, jazz and pop concerts, featuring amongst others the Kinks, the Applejacks, the Animals, Yardbirds, Ronnie Scott's orchestra, Brian Poole and the Tremeloes.

Now derelict and decaying, Locarno/ Corn Exchange has been victim to two fires and several redevelopment plans which are yet to come into fruition.

On the New Swindon Town Hall construction in 1890, all civic functions passed down to the new residence in 1891.

A cemetery is a somewhat unusual space to use for a public park. However, when planned Swindon’s first municipal cemetery was designed to be just that on its closure to new burials. Radnor Street Cemetery built in 1881 was the last resting place of 33,000 Swindonians, a number which includes 104 war heroes.

Situated in the heart of Old Town, its designer chose to lay out the grounds akin to a country estate. With tree-lined edges and winding pathways between the burial sections. On the cemetery’s closure in the 1970’s the designers’ vision for it to remain as a public park was realised with residents being welcomed to use the space as a place to walk and relax.

Today, the cemetery is a rare green space in a sea of Victorian homes and buildings erected to accommodate the expanding railway workforce. In support of the cemetery, Swindon Heritage provides regular guided walks, family records and burial record look up days.

Old Town is proud to have been the birthplace and home to many an influential and important figure. Many of which have been recently recognised with a blue heritage plaque. If you wish to view these plaques for yourself, please see the list below;

If you enjoyed Emma's article, you can read more on her blog here!