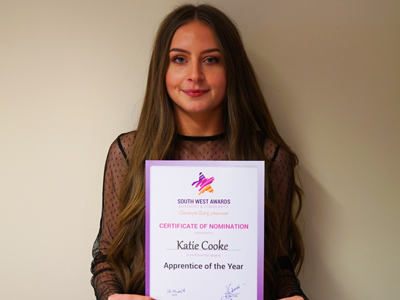 We’re excited announce that Total Guide to has been nominated for three separate awards in the South West Business & Community Awards, and that our MD, Liz Ledger and Digital Marketing Administrator, Katie Cooke, have also been nominated.

The South West Business & Community Awards is organised by The Great British Expos Ltd to recognise businesses charities and individuals that have made an outstanding contribution to their region.

We’re proud to announce nomination in the following categories: After nominating Katie for the Apprentice of the Year Award in secret, the shiny envelope to the office was a complete surprise. Ever modest, Katie said “I was just really surprised that I was nominated. It was a bit of a shock but I feel proud and very happy.”

"The way Katie keeps up her high standards of work for Total, as well as balancing her studies is phenomenal. Nothing is ever too much for her to handle, she's a joy to have in the office and we're lucky to have her. The nomination is the least we could do!" The evening itself will be hosted by ‘The Entrepreneur’s Godmother’ Alison Edgar and will feature live musical performances. As fantastic as these award ceremonies are, there is a more serious side; all the money raised from the evening will go to Prostate Cancer UK.

As we get closer to the South West Business & Community Awards, well keep you updated as to how we get on. Wish us luck!